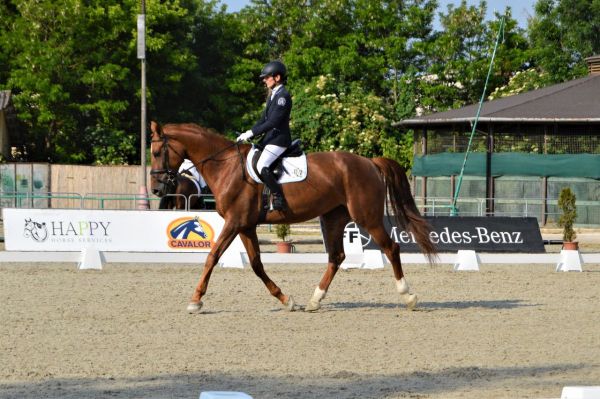 The first of the three planned dressage events took place on the premises of the National Stud Farm Topoľčianky on June 12-13, 2021. There were dressage tests from "A" to "S", including classes for young horses.

Nadežda Ivaničová headed the jury, other members were Jana Medová, Silvia Poláková and Iva Schützová from the Czech Republic also accepted the invitation. Forty riding pairs measured their abilities. For many of the riders, this event was also a preparation for the Slovak Championships and at the same time an opportunity to meet the qualification criteria for individual categories of the championships.

On Saturday, there was a pleasant summer weather that lasted all day. The sports competition opened up with tasks for young horses. The FEI dressage test for 4-year-old horses was the first to run. It was evaluated in two categories - 4-year-old horses and 5–6-year-old horses. This competition was relatively strongly represented. Up to 8 riding pairs started here, of which 4 were young mares from the National Stud Farm. It was their premiere participation in a sporting event in order to test their rideability, character and overall perspective in dressage sport. In the future, they are expected to be used in breeding as a new generation of quality mothers in the herd of Slovak warmbloods. The young talented stallion from the breeding of the National Stud Farm Loretto with Peter Vančo in the saddle received the highest rating in the department of 4-year-old horses. This same rider also won first place in the category of 5–6-year-old horses with mare Dormane du Puy 16. Linda Fraňová and Hermiona from JO Martin Záturčie won the dressage task for 5-year-old horses at level L. Michaela Horná and mare Lorry gave the best result in the task for 7-year-old horses. Michaela Balážová and Daily Fürstin from the 1st Dressage School ZR Prešov won the FEI Children preliminary A. In the children's category, Dianka Hunová was the most successful on the pony Sans Gene from JK Ivanka pri Dunaji. Lucia Križanová and Silver Moonlight from Equitana Sport Horses Bratislava won in the open competition on level L. Among the children, the best was Tamarka Poláková and Cartago S from KPKRJ Rimavská Sobota. At level M, Lara Dangl and Giovanni from JK Ivanka pri Dunaji won. Linda Kilíková and Rocky Diamond from Horse Klub Nitra confirmed their qualities in the role of grade ST. The winner of the highest competition- Intermediare I - was Peter Vančo and the Lipizzaner stallion Conversano XIII-47 from JK NŽ Topoľčianky.

On Sunday, Peter Vančo and Loretto repeated Saturday's victory among 4-year-old horses. In the category of 5–6-year-old horses, the home rider David Kintšer and the stallion Pluto XXI-9 won again. Linda Fraňová and Hermiona from JO Martin Záturčie defended the championship in the task for 5-year-old horses at level L. Linda Kilíková and Rocky Diamond from Horse Klub Nitra achieved the best result among 7-year-old horses at the ST level. In the open competition at level A, Milan Kuhajda with the horse Emilio from Jurský dvor Nitra was the most successful. Dianka Hunová and Sans Gene from JK Ivanka pri Dunaji were again the best in the same role in the children's category. At the L level, Lucia Križanová and the mare Silver Moonlight from Equitana Sport Horses Bratislava defended the victory from the previous day. Among the children, Tamaraka Polláková and Cartago S from KPKRJ Rimavská Sobota took the first place. The day continued with the FEI Junior Team at level M, where the home rider Kristína Flaková and Bonnami won. In the class of St. Georges' best performance was shown by Linda Kilíková and Rocky Diamond from Horse Klub Nitra. The day culminated with freestyles to music Intermediare I, where the home rider Peter Vančo and Conversano XIII-47 won.

Congratulations to all on the results achieved. You can find complete result sheets at www.nztopolcianky.sk , www.sjf.sk , www.drezura.wbl.sk . A big thank you goes to the companies Heineken and JK NŽ Topoľčianky for the prizes in kind they donated to the competitions.