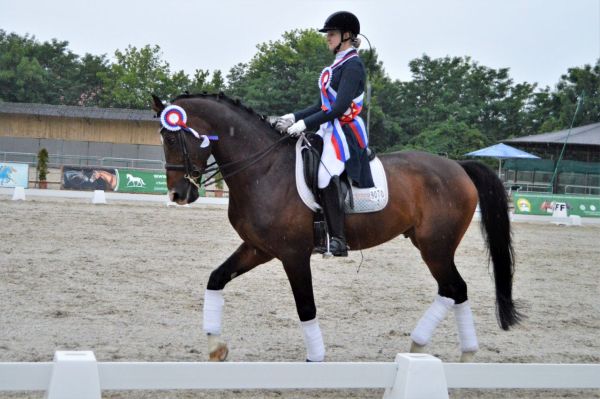 On July 16-18, 2021, the Slovak Open Dressage Championships took place in the premises of the Topoľčianky National Stud Farm. After the young horses, this time it was the categories of seniors and pony riders.

More than fifty riding pairs from all over Slovakia came to measure their riding ability. Riders from Hungary also supported the event with their participation. During the three competition days, there were open competitions as well as competitions for young horses. Detailed results can be found at www.nztopolcianky.sk , www.sjf.sk , www.drezura.wbl.sk.

The president of the ground jury was Doc. RNDr. Iľja Vietor, PhD. The rest of the jury consisted of Peter Juhász (SVK), Nadežda Ivaničová (SVK), Ing. Iva Schützová and Ing. Simona Fialová, Ph.D. both from the Czech Republic. Jana Medová (SVK) was appointed to the role of a steward.

Participation in the championships was conditional on meeting the qualification criteria at the required level. Unfortunately, only Dianka Hunová and Sans Gene from JK Ivanka pri Dunaji met the conditions among the pony riders, which made it impossible to open the category. Nevertheless, the pair won many victories and places from open competitions.

The senior category rides at the highest level of the championships - the first round is St.George and the second is Intermediare I. The second round is a freestyle to music that enjoys great popularity among spectators. Five riding pairs from three different clubs met the qualification. After adding up the results from two rounds, Paraskevi Spišáková and the hot G Star from JK Equipolis became the clear winners. In addition to the gold medal, they also won the title "Champions of the Slovak Republic in dressage". The silver and bronze medals remained in the Topoľčianky National Stud Farm thanks to Peter Vančo with Conversano XIII-47 and Michaela Horná with Forever. The fourth place was taken by Michaela Pechová and Edgar from JK Ivanka pri Dunaji. Michaela Horná and her second horse Lorry won the fifth place.

A big thank you goes to the companies Cavalor, Heineken and the National Stud Farm "Topoľčianky", which donated valuable prizes to open competitions. The main sponsor of the championships was the company Spillers.

An absolute novelty was the first year of the team competition called Team Cup. The riders formed three-member teams, in which one riding pair competed at level A, the second at level L and the third at level M. The order of the teams was determined by counting the results of the members of each team.

Financial vouchers for the winners and placed were donated by the company with riding clothes and equipment ProHorse Nová Baňa.