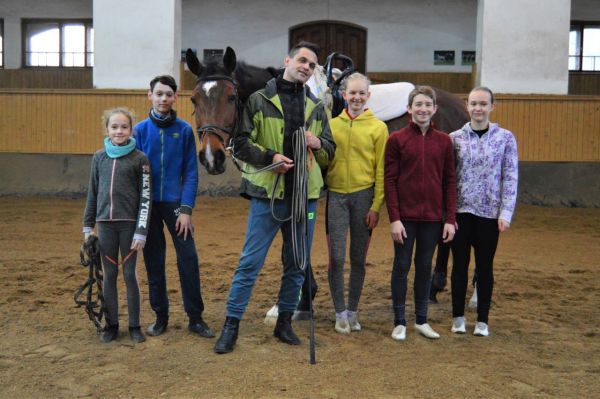 Vaulting is an equestrian discipline that consists of gymnastic and acrobatic exercises on an unsaddled horse. It provides an excellent basis for the later development of other riding disciplines. Children and young people are mainly involved in vaulting. It develops their movement talent, instils in them a responsibility in the form of caring for a living creature and opens up opportunities for them that can develop into a successful sports career of the individual.

The vaulting department in the Riding Club at the Topoľčianky National Stud Farm is one of the long-standing and stable entities in Slovakia. They started their activities in June 1993 under the leadership of coach Alena Matúšková. In 2005, after her departure, she was replaced by Boris Kodak, who still heads the vaulting department to this day. During this period, they raised many successful trainees and trained a large number of excellent vaulting horses. At the national level, they hold championship medals in various categories almost every year, and horses are steadily winning the title of "Horse of the Year". Their performances are also competitive in international competitions, where in the junior categories they gain a qualification for the European Championships and the World Championships, in which they have already participated several times successfully.

Behind every medal won is a hill of hard work. Trainings are not only about exercise on a horseback, but also about intensive fitness and gymnastic training. In addition to preparing children, trainer and lounger Boris Kodak is also in charge of preparing vaulting horses. He is currently working with three horses of the Slovak Warmblood breed - Leon, Lea and Betty.

We bring you an interview about how coach Boris Kodak perceives his work.

To work with youth is very interesting, mainly because it is very diverse. Every child is different, everyone needs to be worked on individually and each one will bring something new to the section. Everyone has a different nature; everyone finds motivation elsewhere and everyone needs a different approach. We work with girls differently and boys differently. Unfortunately, over the years of my practice with children, I have seen a general decline in young people's interest in sports and any physical activity in general. High activity on social networks, nothing to do and boredom is a modern lifestyle of many teenagers. It is becoming increasingly difficult to arouse their interest in sports, to which the restrictions related to the Covid-19 pandemic situation also make a significant contribution. Last year, I had two recruits scheduled to join the department, one in the spring and the other in autumn. I was forced to cancel both due to the Covid-19 situation. I believe that this year the situation will improve and life will return to normal. I have had very good experience in the past with cooperation with primary schools. Personal meetings with students in the classroom worked for me. Many have no idea what vaulting is and that such a thing even exists. In a personal presentation, children are more easily motivated to come and see the training and get an idea of ​​what it entails.

Each new member must go through the so-called familiarization process. They will get acquainted with the environment, we will show him where is what situated and explain how to move with the horses. They will gradually get acquainted with the training system and vaulting terminology. It's a lot of information to start with. Acquiring it is a time-consuming process. In addition to the physical training of the exerciser, taking care for the horse is an integral part. Children learn to clean horses and learn daily handling. The older ones know how to tack them, and later, after gaining sufficient experience and skills, many of them also ride in a saddle and go for walks in the woods with a coach.

For every athlete, the greatest motivation is to go to a competition and compare own performance with others. This is also the direction of our activities. Vaulting has many age categories and 6–7-year-old children can also compete in walk. Regardless of the category, we train the technique of demonstrating individual exercises during training. Gymnastic and fitness training is very important. As for the freestyle of individuals, the children prepare their own so-called the skeleton of the set and then we fine-tune it together with regard to the sporting level and strength of the individual. Last but not least, costumes and music also play a role in the evaluation of the performance. We always try to reconcile them so that it is on one topic. I usually design the costumes by myself, we fine-tune the details together with the children and the tailor. Finding the right music is also a time- consuming process. Sometimes it happens that after a week of searching, during the training you find out that it simply does not fit, so the whole process starts again. When we have it all set together and the children know how to practice their sets to music and within the time limit in training, they become competitors. They go to national competitions and when they show their potential, they move to the international level and become representatives. It's a long and difficult process and not every child gets this far. In addition to the preparation of individuals, we also deal with the category of “pas de deux” and “squad”. It is more difficult, because there are already two or three exercisers on the horse at the same time.

The preparation process has basically the same principle as for individuals - to put together a choreography of a freestyle which must be appropriate to the abilities of the exercisers, to find a suitable theme, music, costumes... and of course the horse. For a squad, the horse must be specially prepared must be able to carry three exercisers that move all over his body is not easy, must be resistant to external disturbing, and must have a regular gallop. During some movements, the exercisers are up to 5-6 meters high, any sharper movement of the horse or irregularity in the gallop disturbs their balance and may threaten to fall. However, until we get with the choreography on the horse in the gallop, it is preceded by training on the ground, then on the horse simulator, followed by the horse in walk and only then we gradually start in gallop. For pas de deux and squad, I try to choose children, who are already more efficient and experienced and can hold each other and merge. Reconciling one group of six children is quite difficult. To decide who will be the "holder" and who will be the "flier" takes all year round.

Our sports season ends with the Championships of Slovak Republic, which always take place in September. In October we start with winter training. We begin with a kind of sport-camp that takes 4-5 days. Mostly I plan it somewhere in the Tatras, in a nice mountain environment, where we have a swimming pool, gym and also the possibility of recreational activities. In addition to fitness training, children will gain a lot of experiences and at the same time strengthen the team. Horses have more relaxation during this period, which they really deserve after a demanding sports season. They go for walks, give them massages and make full use of the horse solarium that we have at our disposal. We work with the children on changes in the line-ups, or on new themes and musical accompaniments for the next season. We focus more on fitness and gymnastics training. We use the covered space between the two stables as a gym. We can bring a horse simulator, trampoline, mats here and we can also use gymnastic rings here. The outdoor area provides plenty of opportunities and space for running, which develops the cardiovascular system, teaches children to breathe properly under load and, last but not least, has a positive effect on the psyche. We also focus on strengthening, of course, everything appropriate to the age and physical condition of children. In cooperation with a gymnastics trainer and also a fitness instructor, we focus on exercises that contribute to the overall physical development and at the same time help to improve performance on the horse.

I get young horses for vaulting training after basic training under the saddle. They have no experience on the lounge, neither with vaulting tack nor with children. They have to learn everything. Basically, I choose horses of bigger frame so they are able to carry a squad in the future and they must have a good character. Leon is a 9-year-old gelding after Dorman du Puy from his mother Lord Inci Tatus 16. I started working with him when he was 4 years old. After a year he completed the first national competition and after the next year he was able to gallop with the squad. Full of worries, I took him to the competition under the squad and he was immediately rated as the best horse of the event. It has been competing internationally since 2019. He is our darling, children love him. Lea is also 9 years old and she is Leon's half-sister - after Dorman du Puy from her mother Lord Inci Tatus 6. They came to the vaulting training at once. We train individuals and pas de deux on her and we started rehearsing a squad as well. She already has experience at the international level. The third mare is the youngest in the training, her name is Betty. She is 7 years old, after Quirado from her mother Boris du Melnire 19. She completed the first competition last year and I was very happy with her. She has an excellent character; she is obedient and hardworking. I would like her to gallop with the squad in the future.