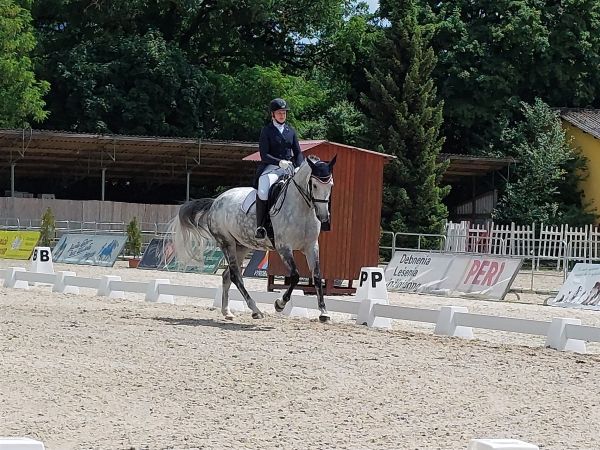 On June 4-5, 2022, the first of three planned dressage events took place on the premises of the National Stud. There were competitions at levels from 'Z' to 'T', including tests for young horses.

The jury was headed by Nadežda Ivaničová, the other members were Peter Juhász, and Iva Schützová and Simona Fialová accepted the invitation from the Czech Republic. Almost fifty equestrian pairs competed. For many, this event was also a preliminary preparation for the Slovak Championship and at the same time an opportunity to meet the qualification criteria for individual championship categories.

The competition for 4-year-old horses was the most represented, followed by tests at the ST and T levels. In the test for 4-year-old horses, up to 9 4-year-old horses presented themselves. The competition was won by Milan Kuhajda and Donna Grazia from Jk Jurský dvor Nitra. In the category of 5–6-year-old horses, 5 riding pairs competed. The best result was achieved by the local Peter Vančo with the stallion Loretto. This pair also won the task for 5-year-old horses. In the competition for pony riders, Janko Magál and Dafne Fan Dej from TJ Žrebčín Motešice won before Lilly Marthaler and Silvio also from TJ Žrebčín Motešice. Silvia Záhorská with the horse Graduell from JK Ivanka pri Dunaji won the first place in the test at the Z level. Among the children, Diana Hunová with the horse Armín, also from JK Ivanka pri Dunaji, did the best. It continued on with the difficulty level L. The best performance was performed by home Martina Nittnaus with the Lipizzaner stallion Favory XII-13. In the grade S competition, she was replaced on the first place by her colleague Kristína Flaková with the mare Bonnami. Lukas Blatzheim with the horse C. Design VH Bloemenhof from Germany won at the ST level. In T, Linda Kilíková and Rocky Diamond from JK Horse Club Nitra won the competition.

On Sunday, the order was slightly mixed between the 4-year-old horses. The winners were Linda Fraňová and Hariffa MD from JK Martin Záturčie. In the category of 5-6-year-old horses with a large lead, the local Peter Vančo and Loretto defended the victory, as well as in the following competition for 5-year-old horses. At level Z, Silvia Záhorská and Graduell from JK Ivanka pri Dunaji took the first place. Diana Hunová and Armín from the same club became the best in the children's category. Martina Nittnaus and Favory XII-13 from JK pri NŽ Topoľčianky gave the best performance at the L level. In S the first place was taken by Petra Slušná with the horse Fürst Lothario from JK Ivanka pri Dunaji. Lukas Blatzheim with the horse C. Design VH Bloemenhof from Germany became the best riding pair in ST again. He also got the best rating at the T level with his second horse Johny Depp 4.

We heartily congratulate everyone on the results achieved. Complete results lists can be found at www.nztopolcianky.sk , www.sjf.sk , www.drezura.wbl.sk . Many thanks to Happy Horse Service Cavalor, Prohorse, Heineken and JK pri NŽ Topoľčianky for the prizes in kind they donated to the competitions.