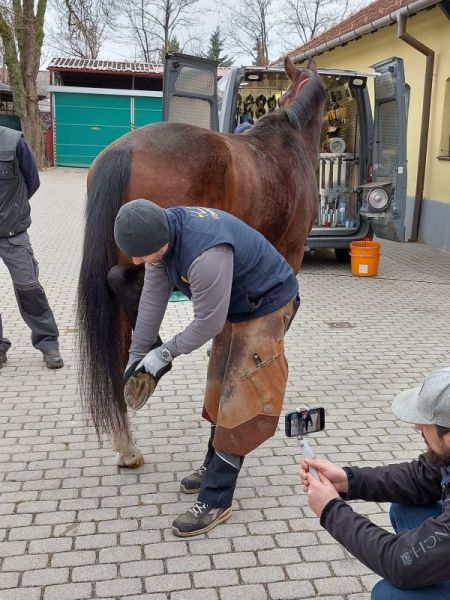 On February 19, 2022, the Slovak Farrier's Guild organized a seminar called Natural balance focused on the adjustment of the bare hoof. The National Stud in Topoľčianky covered this event by providing its premises. Daniel Anz, a recognized expert in the subject in Europe, who specializes in the so-called barefoot trim, accepted the invitation as the trainer. The seminar served to increase the expertise of members of the Slovak Farrier's Guild. At the end, the participants received a certificate of completion.

The Slovak Farrier's Guild was founded in 2015. Its main goal is to bring together people who deal with hoof care and education to improve the quality of their work and the services provided. Education takes place through various seminars and workshops not only in Slovakia, but also in neighbouring foreign countries. In addition to professional farriers, it also brings together amateurs and sympathizers. Admission to the guild is subject to payment of registration and membership fees.

According to one of the founding members of the organization, Ján Kurtík, one of the long-term goals of the Slovak Farrier's Guild is to condition the professional care of horses' hooves with professional education. In countries like England or Switzerland, such schools or trade unions in schools exist and have a tradition of several years. In Slovakia, something like this works at the University of Veterinary Medicine in Košice, but only in the form of a twenty-day course. The first step in this direction is the effort to supplement the subject of horse shoeing and care of hooves in hippology departments of secondary schools. The initiators are aware that it is a long shot, but they believe that they will be able to gradually realize it and thus ensure higher expertise in the farrier craft in the future.