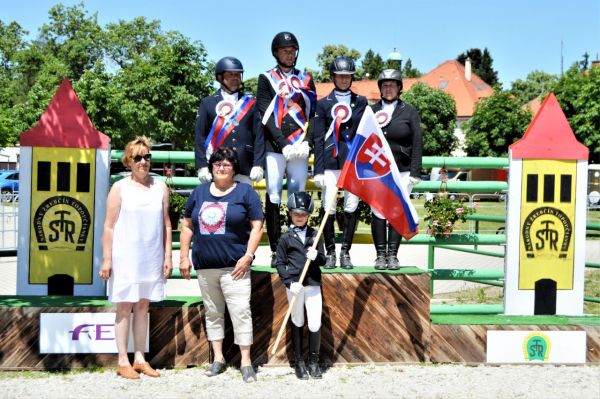 On June 18-19, 2022, a two-day dressage event was held again on the premises of the National Stud. In addition to open competitions, spectators could watch the battle of equestrian pairs in two rounds of the Slovak Championships of young horses and pony riders and also of the ZSO SJF Championships. The hot summer weather tested the fitness of all participants.

The jury was made up of well-known names not only from Slovakia, but also from abroad. Nadežda Ivaničová (SVK) was appointed to the role of president of the Jury, Silvia Poláková (SVK) also accepted the invitation, Iva Schützová visited repeatedly from the Czech Republic, and work duties made it possible for international judge Peter Hansághy and Zoltán Prutkay from Hungary to come. Hungarian riders from the state stud farm Szilvásvárad and from the Hungarian riding club Xenophon also supported the event with their participation, and two female riders from Germany also measured the distance.

Almost 60 riding pairs came to test their skills, which resulted in more than 80 starts per day. There were competitions at all levels, including tasks for young horses and ponies. After a long time, the highest international competitions - Intermediate A, B and Grand Prix - were held again.

A big thank you to the companies Happy Horse Service, Cavalor, Heineken, Prohorse, Prestige -Reit Sport Germany and the National Stud "Topoľčianky", who donated interesting prizes in kind to the competitions.

In the Young Horse Championships, two categories were opened: 4-year-old and 5-6-year-old horses. This year the representation was really numerous, up to 9 riding pairs in each category met the qualification.

Milan Kuhajda with the mare Donna Grazia from JK Jurský dvor Nitra became the new Slovak Champion in the category of 4-year-old horses. Second place was won by Simona Sklenárová and the mare Novalette Van De Zoomvliet from JK Horse Klub Nitra. The bronze remained in the Topoľčianky National Stud thanks to Martina Nittnaus and the mare Charissa.

Four couples entered the competition for pony riders, but only one of them - Janko Magál and Dafne Fan Dej - had the qualifications to start in the championship competition. Therefore, the title of champion in this category could not be awarded. After adding up the results of both rounds, the best result was achieved by Janko Magál and Dafne Fan Dej from TJ Žrebčín Motešice, Lilly Alena Marthaler and Magic Mike from the same club finished in second place. The third place was won by Nela Vozárová on the horse Ninus from JK Over Žilina.

The conditions for the opening of championship categories for ZSO were met in the category of young horses and the senior big tour, which was ridden at the ST level. In the category of young horses, the order of the first three rungs was the same as at M SR. The winner was Péter Edmár with the horse Bonaparte, the silver went to Peter Vančo and Loretto, and the bronze again to Péter Edmár with the horse Mc Kinley V'D Wolfshoeve.

Among the seniors, Linda Kilíková and Rocky Diamond from JK Horse Club Nitra won the gold. The silver and bronze remained in the National Stud, thanks to Michael Horná on the horse Forever and Peter Vančo with the Lipizzaner stallion Conversano XIII-47.

We heartily congratulate the winners and those placed and look forward to meeting again on July 16-17, 2022 at the open SR Senior and Young Riders Championships in Topoľčianky.